Kraig Washington came from a line of pro athletes, including his grandfather, who integrated the NFL 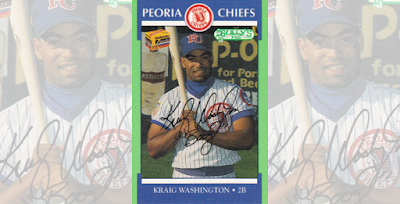 "I remember our father telling us that we had no idea how hard it was for our grandfather," Kraig Washington told The Times in 2011. "Those were painful times that weren't easily discussed."

Kraig Washington's career began in 1988, taken by the Cubs in the 21st round of the draft out of Rancho Santiago College in California.

In high school in Diamond Bar, Ca., Kraig Washington played both baseball and football. On the baseball field, he hit .471, with three home runs and also pitched.

At Rancho Santiago, Washington picked up four hits and three RBI in an April 1988 game. He then reached on an error and scored in a game the next month.

Washington started with the Cubs between short-season Geneva and rookie Wytheville. He got into 59 games between them and hit .284.

Washington then had a brief 1989 campaign. He got into 11 games at single-A Charleston. He then returned for a full 1990 at single-A Peoria.

Washington knocked in a run in a June game on a single, then hit a two-run single in a July game. Washington hit .249 in 98 games overall to end his career. 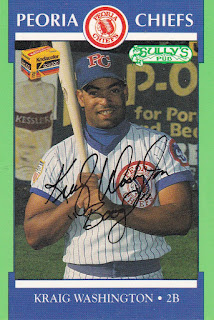