Congress looked at repealing baseball's anti-trust exemption in 1993 and one of the impacts was seen as impacting prospects, including John Polasek, according to The Buffalo News.

The move would have limited the time prospects would stay under team control, a time that stood at a potential seven years, The News wrote.

"Minor-league baseball is wonderful, and it's great what it does for communities," Polasek told The News. "But being locked into a deal for seven years is not good for me."

Polasek ultimately did not play seven years. He also never made the majors. Polasek's career spanned four seasons. He never made AAA.

Polasek's career began in 1990, taken by the Expos in the 38th round of the draft out of Rice University.

Polasek started with the Expos at short-season Jamestown. He went 2-3, with a 1.89 ERA over 25 relief outings. He also saved eight.

Polasek moved to the Orioles system for 1992, released by the Expos that spring. He then played the year between high-A Frederick and AA Hagerstown. He went 2-3, with a 0.81 ERA over 14 outings at Frederick, but 1-2, with a 6.04 ERA at Hagerstown.

He then played 1993 back at Frederick. He went an inning of scoreless relief in an August game. Overall, he went 3-4, with a 3.36 ERA over 55 relief outings to end his career.

Polosek spoke to The News in October 1993 as he started preparing for his post-playing career while an intern for Rep. Richard K. Armey, R-Texas. Polasek has since settled in Texas, serving as founder and manager at Quanto Capital Partners in Houston. 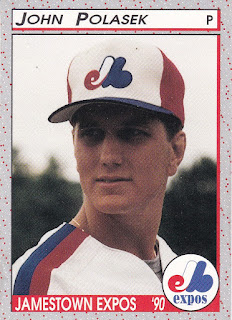