John Patterson hit a game-winner for the Giants in 1993 race; Played in four major league seasons

Originally published Feb. 9, 2013
It was John Patterson's first major league at bat of the season. He'd been out much of that year recovering from rotator-cuff surgery.

This first at bat, though, came in the height of a pennant race, his Giants trying to maintain their lead over the division rival Braves. With one swing, Patterson helped them do that, taking a 2-2 ninth-inning tie and turning it into a 3-2 Giants win.

"It's a dream that anybody that plays baseball thinks about. Actually, in my dreams it was with the bases loaded," Patterson told The AP afterward. "But this was just as good."

For Patterson, it was also his first major league home run. In a career that spanned four big league seasons, he would get just four others.

Patterson's professional career began in 1988, taken by the Giants in the 23rd round, out of Grand Canyon University in Phoenix.

That spring, Patterson was called a "rookie sensation" by The AP, the switch-hitter Patterson manufacturing the winning run in a spring game.

"I'm just getting good pitches to hit and putting good wood on them," Patterson told The AP after that spring game.

With the Giants in the regular season that year, Patterson got into 32 games, but hit just .184. After his rotator-cuff surgery, Patterson returned for 16 September games. He hit that one home run, but still hit just .188.

"It was a big night for Matt," Giants manager Dusty Baker told The AP afterward of Williams, "and an even bigger night for John Patterson."

Patterson is last recorded as playing in 1998, in the minors with Tampa Bay. 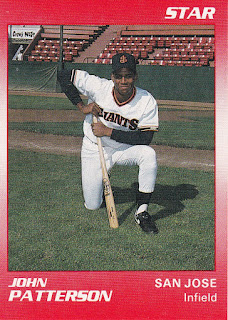