Joe McCann broke out of a pitching slump at Columbia in 1990; Played five pro seasons, never made AA

Originally published July 7, 2018
Joe McCann worked on his mechanics early in the 1990 season with single-A Columbia's pitching coach and it seemed to pay off, according to The Spartanburg Herald-Journal.

McCann took a shutout into the ninth inning and gave up five hits, all singles, The Herald-Journal wrote.

"I've been struggling the first couple of games," McCann told The Herald-Journal afterward. "I told the guys before the game that I needed to break out of my pitching slump."

McCann went on from Columbia to high-A St. Lucie the next year, but that's as high as he got. McCann played in five pro seasons. He never made AA.

McCann's career began in 1989, taken by the Mets in the 47th round of the draft out of Georgia Perimeter College and Milton High School in Georgia. McCann was also credited as Joseph McCann.

McCann started with the Mets at short-season Pittsfield. He went 4-2, with a 3.04 ERA over 13 outings, six starts.

McCann played his final pro season in 1993 with the Reds at high-A Winston-Salem. He went 11-8 over 32 outings, 23 starts to end his career.

McCann's son, Kyle McCann, has followed his father into baseball. In 2018, Kyle McCann played in college at Georgia Tech. 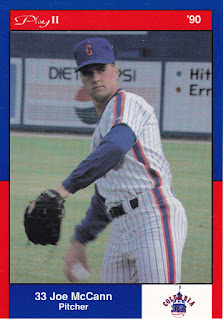