Originally published April 25, 2018
What made Jack Fisher memorable to fans so many years after his career, The Baltimore Sun asked him in 2010.

Fisher pointed to the homers: The hurler who pitched in the bigs from 1959 to 1969 gave up Ted Williams' last, Roger Maris' 60th of 1961 and the first home run at Shea Stadium, according to The Sun.

Fisher played primarily for the Orioles and Mets, but also got time with the White Sox, Giants and Reds. He later had a brief coaching career.

Fisher's long career in baseball began in 1957, signed by the Orioles out of the University of Georgia.

He played his first season at single-A Knoxville, then 1958 mostly at Class B Wilson. He then made his debut in Baltimore in April 1959.

Fisher played one more season with Baltimore, then a year with San Francisco. He arrived with the Mets in 1964, where he went 10-17, with a 4.23 ERA. Willie Stargell tagged him April 17 for the first Shea round-tripper.

"That's what I thought you should do," Fisher told the author. "Give me the ball and I'll go out and pitch. I had a fairly fluid delivery that didn't take a lot out of me."

Fisher played his final two seasons with the White Sox and Reds. Fisher returned in 1989 and 1990 with the Mets as pitching coach at single-A Columbia. 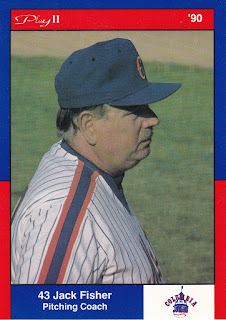