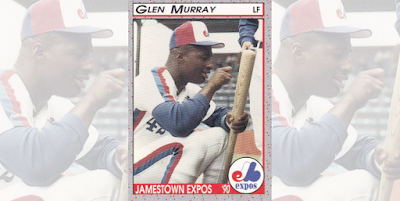 The Philadelphia Daily News described the ball Glenn Murray hit in this May 1996 game as producing a "loud clomping noise" as it hit off home plate and bounced high in the air.

"When I saw it go up," Murray explained later to The Daily News, "I just put my head down and was hoping I was going to beat it out."

Murray did beat it out for a base hit, the first of his major league career. Murray got that first big league hit as he made the majors for the first time in his eighth season as a pro.

He saw 38 games that season, marking the extent of his major league career. His overall professional career spanned two decades.

Murray's career began in 1989, taken by the Expos in the second round of the draft out of Manning High School in South Carolina. Murray was also credited as Glen Murray.

Murray turned pro out of Manning, having played football, basketball and baseball there. His football skills gained him a spot on the South Carolina State team. Instead, he signed with the Expos.

"It changed my life," Murray told his hometown Manning Times years later. "I talked with my parents. When I had to make the decision, we knew that baseball was the best choice."

Murray started with the Expos in the rookie Gulf Coast League and at short-season Jamestown. He hit .186 in 30 games overall.

Murray hit AA Harrisburg in 1993, where he hit 26 home runs. He then moved to the Red Sox in a spring 1994 trade. The trade seemed to open up a path to the majors for Murray, since the Expos had several outfielders ahead of him.

"I was excited" Murray told The Associated Press then. "I just wanted to get out of that situation. We were in a logjam in Montreal."

Murray played that year and the next at Pawtucket. He never saw Boston. It took another trade, one to the Phillies, to finally get Murray to the majors.

Murray moved to the Reds system for 1997 and 1998, then moved to independent ball. He made a home at independent Nashua over the next eight seasons. Along the way, he played in Mexico and saw 10 final games in affiliated ball with the Cardinals at AA Arkansas in 2000.

His final credited pro time came in 2008, with five games played at independent Bridgeport. By the time his career was over, he'd played in 19 total seasons and hit a total of 334 professional home runs, by Baseball-Reference's count.

"I never realized how many (home runs) I'd hit until I saw the total at the end of my career. Not many guys can say they hit that many at the professional level," Murray told The Florence Morning News in 2013. "Looking back on everything I had to go through, every up and down, I'd do it all again." 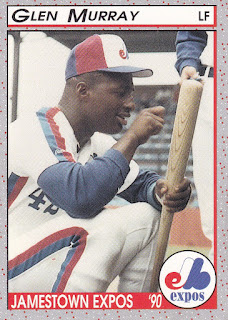