Deron Sample hit home runs in college, tried to prevent them as a pro; Played seven seasons, never made AA

Originally published May 2, 2018
Deron Sample started the 1988 season hot at Paris Junior College in Texas, according to The Paris News.

Sample knocked six home runs over the team's first 11 games. He knocked in 14 and batted .438, The News wrote.

Sample went on from Paris to a pro career that lasted seven seasons - all spent as a pitcher. He never got hot enough to make AA,

Sample's pro career began that year in 1988, taken by the Mets in the 28th round of the draft out of Paris.

Sample started with the Mets in the rookie Gulf Coast League. The hurler went 4-4 over 21 outings, three starts, with a 3.15 ERA.

At single-A Columbia in 1990, Sample did even better. He saved 18, won six and had a sub-2 ERA. He played 1991 between Columbia and high-A St. Lucie. He lost some time due to a shoulder injury and got into 25 outings on the year.

Sample moved to the Marlins for their inaugural minor league year in 1992. He played between short-season Erie and high-A Salinas. He went 2-5, with a 6.14 ERA on the year.

Sample then isn't recorded as playing over the next three seasons. He returned for two final seasons in independent ball, at Grays Harbor, Clarksville and Palm Springs to end his career. 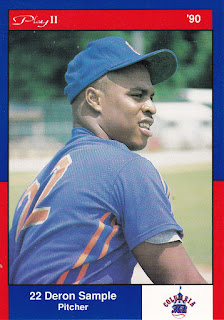