Dave Swartzbaugh received support from his AAA pitching coach, then returned to the majors 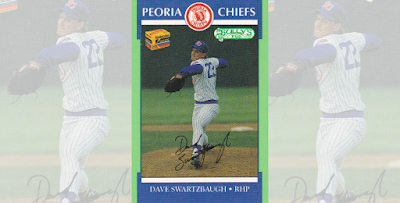 Coming off a poor AAA start in July 1996, Dave Swartzbaugh thought he might be sent back to the bullpen, he told The Arlington Heights Daily Herald that September. Instead, his pitching coach expressed support.

"From that point on, it gave me confidence that I was going to get the ball and not have to worry about going back to the bullpen," Swartbaugh told The Daily Herald.

Swartzbaugh spoke with the paper that September, after he'd been called back up to the majors, as a starter. In his first start with the Cubs in Chicago, Swartzbaugh went eight innings and gave up a single run.

Swartzbaugh's return to the bigs marked his second season in the majors. He went on to see time in one more.

Swartzbaugh's career began in 1989, taken by the Cubs in the ninth round of the draft out of the University of Ohio.

Swartzbaugh played 1993 between AA Orlando and AAA Iowa. He drew praise from his manager at Orlando after an early September start where he went eight innings for a no-decision, according to The Orlando Sentinel.

"Swartzbaugh has been the tough luck pitcher for us lately. He pitched well his last two starts, and both were no-decisions for him," Orlando manager Tommy Jones told The Sentinel. "He showed he has the stuff to pitch at a higher level."

After splitting 1994 and 1995 again between Orlando and Iowa, Swartzbaugh made his debut with the Cubs in Chicago in September 1995.

Swartzbaugh got into seven games in relief - 7.1 innings total - and he didn't give up an earned run.

Swartzbaugh saw his final major league time in 1997, two starts that April. He gave up eight earne in eight innings of work.

He played the rest of 1997 and then all of 1998 back at Iowa. He saw his final  time as a pro in 1999, between AAA Tucson with the Diamondbacks and AA Jacksonville with the Tigers. 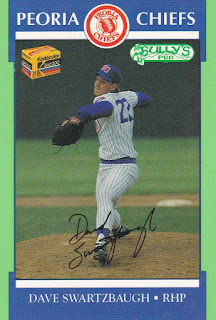