Dan Rambo had a lot of dreams when he was young and he came close; Made AAA, not the bigs 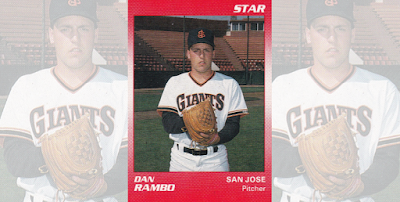 Originally published Oct. 6, 2011
Inducted into the Upper Peninsula Sports Hall of Fame in 2008, Dan Rambo looked back on his career.

It was a career that spanned eight professional seasons. And one that didn't get out of AAA.

"I had a lot of dreams when I was young," Rambo told The Escanaba Daily Press. "My dream was so close."

Rambo's career began in 1989, taken by the Giants in the 28th round out of Central Michigan University. He played that first year at rookie Pocatello and single-A Clinton. Between them, he went 4-5, with a 2.91 ERA.

For 1990, Rambo came into his own at high-A San Jose. Rambo went 12-2, with a 2.19 ERA. He set a team record for consecutive wins, and took home league Pitcher of the Year honors.

Rambo hit AA Shreveport in 1991, going 12-6, with a 3.67 ERA. He also got a three-game look at AAA Phoenix. One of those games came in May against a rehabbing Orel Hershiser.

"Orel vs. Rambo," Firebird General Manager Craig Pletenik told The Los Angeles Times of that machup. "If anybody saw those two names on the marquee, Rambo would win hands down."

Rambo didn't get the win. Rambo split his next two seasons between AA and AAA, ending his time in the Giants system. For 1994, Rambo signed on with independent Brainerd, then with the Brewers at AA El Paso.

He started 1995 at AAA New Orleans, getting into just seven games, going 0-4. He played out the season at independent Tyler, going 10-5 with a 1.90 ERA. He finished out his career in 1996 with independent Madison.

Rambo has since gone on to coach high school baseball, at Pickford-Cedarville High School, south of his hometown of Sault Ste. Marie, working to improve his young team. He's also listed as a state policeman, working out of nearby DeTour, MI.

"I'm proud of the kids," Rambo told The Soo Evening News in June 2011 of his team. "We're still making progress and getting our program to grow. We'll continue to work hard in summer baseball with our 14, 15 and 16-year-olds. Getting them to play a lot more ball can really make a difference." 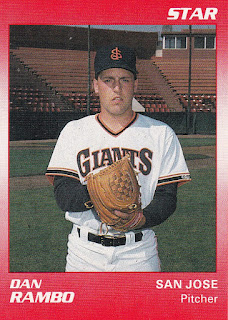