Chris Haney returned to the majors over 11 seasons, also played in Japan

Called up to the Expos in July 1991, Chris Haney was sent back down about as fast. In between, though, the starter took a shutout against the Padres into the seventh inning and picked up his first major league win, The Canadian Press wrote.

"I understand it," Haney told The Press after the game of his minors return. "It's part of baseball. "I'll be back one of these days maybe I'll be able to stay for two days. No, seriously, hopefully the next time it will be for good."

Haney soon did return to the majors and he returned often. He saw major league time over ten-consecutive seasons and 11 in all. He didn't throw his final major league pitch until 2002.

Haney's career began in 1990, taken by the Expos in the second round of the draft, out of the University of North Carolina at Charlotte. His father, Larry Haney, also had a long major league career.

Haney started with the Expos at short-season Jamestown. He soon moved up to single-A Rockford and AA Jacksonville. He got one start at Jacksonville and threw six scoreless.

He returned to Montreal for 1992 and saw nine outings before being traded to the Royals in August. That September, he threw a two-hit shutout.

"I'll remember this for a long time," Haney told The Associated Press afterward. "You don't forget games like this." 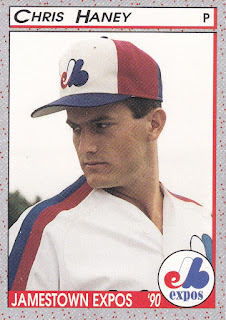