Originally published June 22, 2018
Art Emm had himself a good game in this July 1989 contest, but he'd just as soon have his next good game elsewhere, he told The Orlando Sentinel.

That's because Emm pitched that game in the rookie Gulf Coast League, according to The Sentinel.

"I thought I pitched pretty well," Emm told The Sentinel. "But I hope I'm not around long enough to have more like that, if you know what I mean."

Emm eventually did pitch somewhere else, two other places, to be exact. He never pitched at AA or higher.

Emm's career began in 1988, signed by the Astros out of Onondaga Community College. He played his high school ball at Baldwinsville High, near Syracuse, where he made the school's Hall of Fame in 2016. Emm has also been referred to as Artie Emm and Arthur Emm.

Emm spent his first full season in the GCL with the Astos. He went 1-4, with a 3.51 ERA over nine outings, six starts. He returned to the GCL for five starts in 1989, then spent the rest of the year at short-season Auburn.

Emm played just those two seasons with the Astros, then signed on with the Mets for 1990. He played that year at single-A Columbia. He went 4-4, with a 4.95 ERA over 39 outings, two starts. That season with the Mets marked the last of his career. 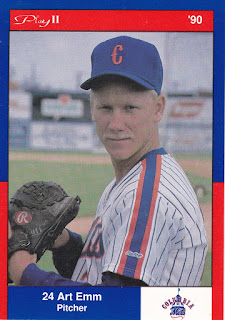