Originally published Sept. 8, 2011
The bases were loaded with nobody out when Vicente Palacios entered that April 1988 game.

By the time he left, he not only got out of that jam without giving up a run, he went three innings and gave up only one hit in the Pittsburgh win.

"He was unbelievable," Pirates manager Jim Leyland told The Beaver County Times afterward. "To come into that situation and do what he did was just unbelievable."

Palacios was in his second major league season that year, having debuted the previous September. He went on to spend time in a total of eight big league seasons, part of an overall pro career that lasted nearly two decades.

Palacios' career began in 1984, signed by the White Sox out of Mexico. He played those first two seasons at AA Glens Falls, but they were brief seasons. The pitcher got into five games his first year and eight his second.

In his first start, Sept. 8, Palacios went eight innings, giving up a single run. He also picked up his first major league win.

In 1988, Palacios got into seven games for the Pirates, starting three. He spent the rest of the year at AAA Buffalo. His season in 1989 consisted of just two games at Buffalo, after shoulder surgery.

He returned to playing, and the majors, in 1990. At Buffalo, Palacios went 13-7, with a 3.43 ERA. Called up in September, Palacios got into seven games in relief, giving up no runs in 15 innings of work. He also picked up three saves. Only seven since 1901 have pitched more innings in a single season, without giving up a run, according to Baseball-Reference.

Going into 1991, the Pirates were looking to Palacios to do bigger things as both a reliever and a possible fifth starter, The Pittsburgh Post-Gazette wrote.

"I've got to like what I saw last year at Buffalo," Pirates pitching coach Ray Miller told The Post-Gazette early that March. "He was a starter for Buffalo, but it's kind of hard to knock what he did for us in relief - a setup man and a semi-closer type. And in September, not only did he set it up, he closed it, too."

Palacios ended up getting into 36 games for the Pirates that year, seven of those appearances as a starter. He also went 6-3, with a 3.75 ERA. He also lost some time in August due to a rotator cuff injury.

One of those starts came April 25, when he rewarded those who had faith in him. He threw a complete-game, four-hitter. He also set down the final 18 batters he faced, The Post-Gazette wrote.

"I mixed my pitches well and the team gave me a lot of support," Palacios told The Associated Press after that start. "I'm just glad they had the confidence to let me start."

Palacios returned in 1992, getting into 20 games for the Pirates, starting eight. The season over, though, the Pirates released him. After a turn with the Padres in spring 1993, Palacios spent that year in the Mexican League.

"That's why I went back to Mexico, to try to get my shoulder back 100% and work hard," Palacios told The AP. "I've put everything together and I'm very happy."

Palacios got into 31 games for the Cardinals that year, starting 17. He went 3-8, with an ERA of 4.44. In mid-July, Palacios threw a one-hitter against the Astros.

In 1995, Palacios played 20 games for the Cardinals, five of them starts. He didn't return to affiliated ball until 1999, with the Mets at Tidewater. He then got seven final appearances in the majors in 2000, with the Padres, his final appearance coming May 11.

Palacios then went back to Mexico, to play there. He's last recorded as playing in 2003, with Dos Laredos. 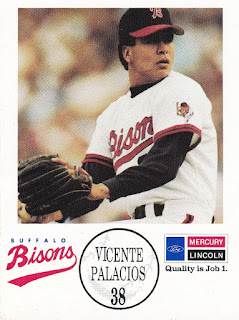