Tom Spencer played and coached in the majors, but he really wanted to manage there

Originally published Feb. 15, 2013
A frustrated Tom Spencer spoke to Cox News Service in 1991 about his situation and the situation of other black managers in baseball.

He went on to serve as first base coach for the Mets in 1991 and the Astros in both 1992 and 1993. His first AAA managerial job came in 1997 and he continued managing at AAA through 2004, going through five cities, from Calgary to Memphis. Spencer most recently is credited as serving as manager at high-A Lancaster in 2011.

"I told him I wouldn't hit-and-run with him or have him bunting, so he didn't need to learn the signs. He wanted to know them," Spencer told The Chicago Tribune. "He said, 'If you want me to bunt, I'll bunt, no big deal.' That's pretty surprising. I have guys on my team who don't like me telling them what to do, and here's a big-leaguer who doesn't mind." 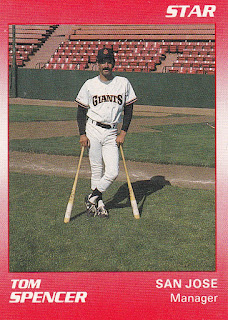