Roger Mason picked up a win in August 1988. It didn't matter that it came in AAA, he got a win, according to The Arizona Republic.

It mattered, because Mason, who had already seen time in four major league seasons, was coming back from shoulder surgery, The Republic wrote.

"I can't believe it," Mason told The Republic after the 2-1 win. "Pitching good is one thing, but getting that first victory is something else. It seemed like forever since the last one."

Mason didn't make it back to the majors that year, but he did in the next, in 1989. He also returned for four more years after that. In all, Mason would see time in nine total big league campaigns, mostly pitching in relief. He would also pick up 22 total major league wins.

Mason's career in baseball began in 1980, signed by the Tigers as an undrafted free agent out of Saginaw Valley State University in Michigan.

After returning to Evansville for 1984, he debuted in Detroit that September. His first victory came Sept. 17, in a game the Tigers could have celebrated the division title, had the Blue Jays not kept pace with a win, The Toledo Blade wrote.

"I tried to treat this like any other game, but it was hard because of what was going on," Mason told The Blade of the pennant race.

He then saw five more starts in 1987, before undergoing surgery. He saw the majors again in 1989, two relief outings with the Astros, then again with the Pirates in 1991.

Mason then picked up his first major league victory in four years in August 1991. He went 3-2 that year, with a 3.03 ERA over 24 relief outings.

He then hit his stride, back-to-back seasons with more than 60 relief appearances. He also saved eight for the Pirates in 1992. In 1993, he split time between the Padres and the Phillies, and had a 4.06 ERA overall. 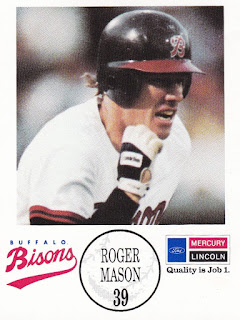