Rene Francisco hesitated to say exactly how high he thought new Royals signee - and No. 5 international prospect - Erick Pena would climb after the signing in July 2019, according to MLB.com.

Suffice it to say, the Royals - and their assistant GM of international operations Francisco - were excited to have him, according to MLB.com.

"We have been following him for three years now, and he is a very skilled and athletic player," Francisco told MLB.com. "He is very smart and from a great family. He speaks fluent English, and just a very bright young man who plays the game with intelligence."

Francisco spoke about Pena amid a long career in baseball that took him from working as a scout to the front office. His own baseball career also included time as a player, two seasons spent in the Cubs organization. He topped out as a player at single-A.

Francisco's career in baseball began in 1989, taken by the Cubs in the 38th round of the draft out of Jacksonville University and Indian River State College.

Francisco started with the Cubs at short-season Geneva. The outfielder hit .277 over 63 games. He also hit one home run and stole 11 bases.

He then played 1990 at single-A Peoria. That August, he knocked in both runs of a 2-1 Peoria win, including the second on a ninth-inning single. Overall, he hit .237 over 75 games. That season proved his last as a player.

Soon after, Francisco turned to coaching at Palm Beach Community College. In 1993, he started work as a scout with the Braves.

Francisco moved to the Royals for 2005. In 2015, he officially became the Royals' vice president/assistant general manager for major league and international operations.

His work even garnered enough attention in 2015 for the Blue Jays to consider him for their top GM job. 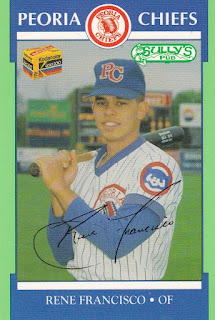