Ray Mullino watched one of his players get drafted, years earlier, he was the one being drafted; Played five seasons

Wetumpka High School baseball coach Ray Mullino prepared to see one of his top players, Reggie Golden, get drafted, he just wasn't sure where Golden would go, Mullino told The Mobile Press-Register in June 2010.

"As it's gotten closer, we've heard it could be in the first round, anywhere from the eighth to the 25th pick," Mullino told The Press-Register. "Or it could be the third round. It just depends on how it all falls."

Golden ended up going in the second round, to the Cubs. It was the same organization that, years earlier, had selected Mullino.

Golden ultimately signed and ended up playing four seasons as a pro. His coach's pro playing career lasted a year longer, five years. Neither Golden, nor his coach made the majors.

Mullino's career began in 1986, taken by the Cubs in the 25th round of the draft out of Mississippi State. He played his high school ball there in Wetumpka.

He played both baseball and football at Wetumpka and won All-Metro honors. Before Mississippi State, he also played at Wallace State.

Mullino started with the Cubs at rookie Wytheville. He got into 15 games, six starts and had a 4.46 ERA.

He played 1987 between single-A Peoria and short-season Geneva. He picked up six saves at Geneva and had an overall 3.03 ERA on the year.

Mullino soon returned to Wetumpka and eventually to his old school. In 2011, he led his club to the playoffs, but ran into two big losses, according to RiverRegionSports.com.

"You can't take away what they were able to do against our staff," Mullino told the site. "When we played them (in March), we were able to keep the ball in the park. We didn’t do that this time." 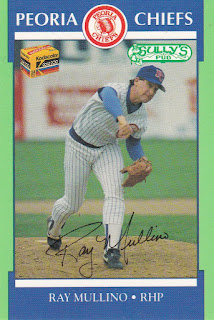