Paul Torres showed his value over 14 pro seasons; Never could show it in the bigs 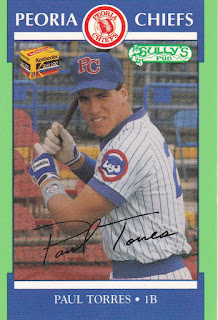 Paul Torres was a valuable player for AA Orlando in 1995, not only for his bat, but for what he could do in the field, according to The Orlando Sentinel.

That year he played both first and third for Orlando. He also got time in all three outfield positions. And Torres was happy to do it, according to The Sentinel.

"Just give me the right glove and point me in the right direction," Torres told The Sentinel in late April. "Third base, right field, left field, whatever. . . . it doesn't matter to me. I'll play wherever they put me."

And Torres continued playing. Torres was in his seventh professional season that year with Orlando. He went on to get credit for a total of 14 pro seasons. Torres, though, never got the chance to play in the major leagues.

Torres' pro career began in 1989, signed by the Cubs as an undrafted free agent out of Chabot College in California.

Torres started at rookie Wytheville, hitting .236, with seven home runs in 54 games. He moved to single-A Peoria and short-season Geneva for 1990, hitting .259 between them with 15 home runs.

Torres also got 26 games at Daytona. At Daytona in 1994, Torres hit .311 in those 26 games hitting fourth in the order, earning praise from his manager Ken Bolek, according to The Daytona Beach News-Journal. The third-spot hitter also got praise.

"We've been very fortunate to have a couple of guys really start swinging the bats," Bolek told The News-Journal that July. "When you have No. 3 and 4 batters swing the bat like they have, it makes a difference."

In April 1995, Torres rattled off a 13-game hitting street, according to The Sentinel. He extended that streak to 13 with a two-run home run.

His streak came after a slow start, according to The Sentinel.

''Early on I was overanxious up there, and I was swinging at bad pitches, now I'm more relaxed,'' Torres told The Sentinel. ''I'm seeing the ball well and just trying to hit it hard somewhere.''

Torres stayed with the Cubs system through that June, traded to the Cardinals with two others for Todd Zeile. Torres ended up playing out the year at AA Arkansas. The next year, he returned to Arkansas, getting one game at AAA Louisville.

Torres moved to the Mariners system for 1997, splitting time between AA Memphis and AAA Tacoma. Torres' time at AAA Tacoma, 59 games, was his only extended time at that level in his career.

Torres' final season in affiliated ball came in 1998, back in Orlando at AA with the Mariners.