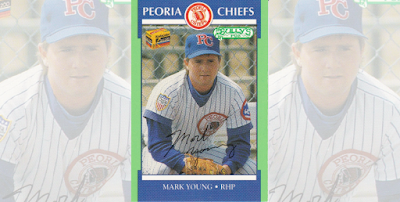 A native of Minnetonka, Minn., Young returned home after his pro career concluded and returned to the amateur Minnetonka Millers, whom he'd played with starting as a teenager.

"For the younger players out there who have never heard of Mark Young," Minnesota Amateur Baseball wrote in 2018, "or seen him play, let me tell you that this guy was good. Like, really good."

Young's brief pro baseball career began in 1989, signed by the Rangers as an undrafted free agent out of Mankato State University. He played his high school ball at Minnetonka's Hopkins High.

At Mankato, Young served as a reliever and saved seven games in 1988 and 11 over his two seasons there.

With the Rangers, Young continued pitching with rookie Butte and he continued in relief. He saw 18 relief appearances, picked up three wins, two losses and six saves.

His first save came in late June against Billings, a four-inning effort where he gave up only one hit. His fourth save then came against Salt Lake in mid-July.

Young then went to the Cubs in a late-spring 1990 trade for Bryan House. Assigned to single-A Peoria, Young got into 24 games and ended with a 3.31 ERA and three saves. That season proved his last in pro ball.

Young then returned home to Minnetonka and the Millers. Young played for the Millers from 1984 through 2006, largely at third base. Along the way, he led his teams to four state championships and he made the all-state tournament team five times. 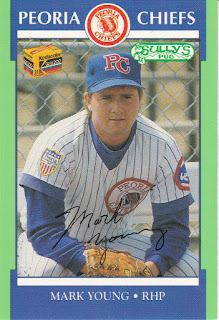