Jimmy Myers had no doubts after ML debut, after a decade in the minors, he thought he belonged

Originally published Feb. 9, 2013
Jimmy Myers debuted with the Orioles in 1996, his first major league time in a decade-long pro career.

To his home state paper, The Oklahoman, Myers relayed his hopes for staying there.

"I have no doubts. I think I belong here," Myers told The Oklahoman. "I felt I belonged in the big leagues three years ago."

Whether he belonged in the majors or not, Myers' stay was a brief one. He stayed up the first month of the 1996 campaign, getting into 11 contests. He never got back.

Myers' career began in 1987, taken by the Giants in the 35th round, out of Crowder High School in Oklahoma.

Myers spent his first two seasons at rookie Pocatello, starting his second season there. He got 21 starts in 1989 at single-A Clinton. After that, Myers was used almost exclusively in relief.

After hitting Phoenix, though, Myers stalled. He split 1993 between Phoenix and Shreveport, his last year in the Giants organization. He played 1994 between the Royals and Pirates organizations, both at AA.

In 1995, Myers arrived with the Orioles. He also got his first call to the majors, but one where he didn't get into a game. Myers got the call, but his caller ID showed the call was from somebody else, not his manager calling, he told The Baltimore Sun after the June call.

"I thought somebody was fooling with me," Myers told The Sun.

Myers' actual major league debut would have to wait. Myers played the rest of the year at AAA Rochester.

Myers' actual debut came April 6, 1996, against the Twins. He went three innings of relief work, giving up two hits and no earned runs. He went on to pitch in 11 games for the Orioles through May 5. In 14 innings, he gave up 11 total earned runs.

Myers went on to play in three more seasons, all at AAA. In 1998, Myers returned home to Oklahoma, playing AAA ball for the Rangers. That spring, his manager at Oklahoma, Greg Biagini, liked what he saw in Myers.

"He doesn't throw a whole lot of pitches," Biagini told The Oklahoman late that March. "He gets the hitters to swing the bat and put the ball in play. So if he continues to show the way he has here in spring training, as long as we catch the ball, he should do very well." 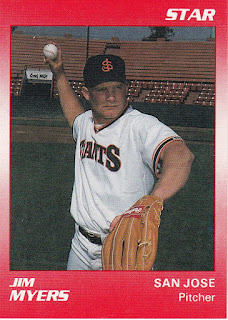