Jim Robinson watched a lot of baseball. That's what scouts do, after all.

But this game in September 2007 was special. This one was pitched in Boston by a player Robinson was credited with finding, Clay Buchholtz, and Buchholtz was throwing a no-hitter in his second career start.

"I was watching with one of my boys," Robinson told The Boston Globe a few days later. "Everybody was on the edge of their seats. We were having a blast."

Robinson served then as a scout for the Red Sox, a job he'd held for a decade. Robinson turned scout after his own career as a player. His own career lasted four seasons. He never made it above AA.

Robinson's playing career began in 1990, taken by the Cubs in the 21st round of the draft out of Mississippi State University. He was also credited as Jimmy Robinson.

''I went down there on a visit on March 15,'' Robinson told The Times. ''I left home and it was about 40 degrees. I get down there and there were 10,000 people in the stands and it was 85 degrees. That sold me right there, the enthusiasm for baseball. Nothing else had to be said.''

Robinson started with the Cubs at single-A Peoria. The catcher got into 26 games and hit .224. He knocked an RBI double in a June game that proved the game-winner. He then threw out three runners trying to steal in a July game.

Robinson returned to AA with the Cubs for 1993, at Orlando. His season, though, was limited to 20 games. A May injury lost him some of that time. He hit .231. That season proved his final as a pro.

By 1997, he'd returned to the game as a scout. He spent two seasons scouting for the Orioles, then switched to the Red Sox. He continued with the Red Sox in 2018 as the club promoted him to the position of national scouting supervisor. 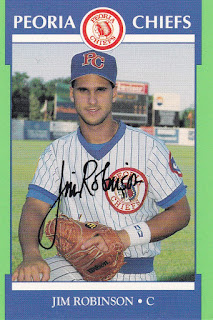