Jim O'Reilly gained experience as a trainer in college and the NFL; Spent a decade-plus as trainer in Cubs system

Jim O'Reilly started as a trainer in college, at Baylor University and even got some experience as a student assistant in pro football.

O'Reilly's grew up in Indianapolis and graduated from Baylor in 1988. In college, he served as a trainer of intercollegiate sports and head trainer for Butler basketball camps from 1986 to 1988, according to his 1989 ProCards card.

He got his NFL experience in 1987, with his hometown Indianapolis Colts. He served as a student assistant athletic trainer there.

O'Reilly then moved to baseball and the Cubs system for 1989 and started there at single-A Charleston.

For 1990, he arrived at single-A Peoria. He then stayed in Peoria for at least four seasons. In winter 1992, he served as trainer for the Grand Canyon Rafters of the Arizona Fall League.

By 1996, O'Reilly was at high-A Daytona. He returned to the Midwest League for 1997, at single-A Rockford. He then arrived at AA West Tennessee for 1998 and served as trainer there for at least four seasons.

O'Reilly gave one of his West Tennessee pitchers a good report in an August 1988 after the pitcher came out with pain in his throwing shoulder.

O'Reilly's last credited time as a trainer in pro ball was with West Tennessee in 2001. 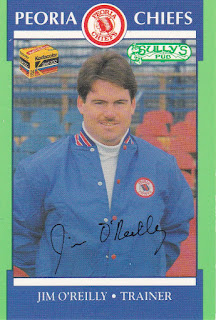