Jim Jones executed a well-orchestrated hit-and-run at Modesto in 1989; Played five pro seasons, not in bigs

Originally published Feb. 11, 2013
Jim Jones already had two hits in the game, the first of a double-header. Now, in the bottom of the seventh, his San Jose Giants needed a run for the win.

With a runner on first, Jones knocked a single, a "well orchestrated" hit-and-run, The Modesto Bee wrote. The runner ended up on third, then, after being set up by Jones, came home with the winning run.

Jones was in his third professional season that year in 1989. He ended up getting just two more, hitting AA, but getting no higher.

Jones' career began in 1986, taken by the Giants in the second round of the January Draft, out of Linn-Benton Community College in Oregon.

Jones started at short-season Everett, hitting .209 in 35 games, stealing six bases. He moved to rookie Pocatello and single-A Clinton in 1987, getting into just 47 games, hitting .244 between them.

For 1990, Jones returned to San Jose, getting 53 games and hitting .224. He also got 19 games at AA Shreveport, getting seven hits in 29 at bats. But it was his final season in the Giants' organization.

Jones played one more season, in 1991, for independent Reno of the California League. He hit .204 in 43 games, ending his career. 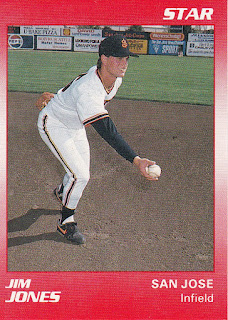