Earl Cunningham tried to do the best he could; The former top pick's best came up short of AA

Taken by the Cubs in the first round of the 1989 draft, Earl Cunningham didn't immediately show the results the Cubs expected of him, The Bloomington Pantograph wrote in April 1990.

Cunningham knew that and he believed he knew what he needed to do to get on track, he told the paper.

"Sometimes I try too hard in a game and have to tell myself to take it easy," Cunningham told The Pantograph. "I have to take it one step at a time and do the best I can."

Cunningham took it one step at a time, but he never did enough to break through. Cunningham played professionally over nine seasons. He never made AA.

Cunningham's career began that year in 1989, taken by the Cubs eighth overall out of Lancaster High School in South Carolina.

Cunningham had been a sought-after high schooler. Going into the draft, there was talk that Cunningham could have gone even higher, to the Braves at the No. 2 pick, but he fell to the Cubs at No. 8.

With the Cubs, Cunningham started at rookie Wytheville. The outfielder hit .258 over 49 games, with seven home runs.

Going into 1990, though, talk about Cunningham's preparation had begun, specifically about his weight. He reported to camp that year 15 pounds over where he should have been, The Chicago Tribune wrote.

"We're going to work him hard," Cubs minor-league director Bill Harford told The Tribune that March. "But we can't get (the weight) all off in two days. You can't forget that the reason he's here is to learn baseball."

His 1993 season at Peoria was limited to just 43 games, his last in the Cubs organization. For 1994, he moved to the Angels system. He saw 40 games that year at single-A Cedar Rapids another 36 at high-A Lake Elsinore.

Cunningham showed some life at the plate with Cedar Rapids, including eight home runs and five doubles.

"I'm finally starting to realize that I just have to please myself," Cunningham said in a Cedar Rapids radio interview, according to The Arlington Heights Daily Herald. "As the No. 1 pick, I was putting too much pressure on myself trying to please other people."

Cunningham returned for 78 games in 1995 at Lake Elsinore and hit .239. He moved to the Rockies system for 1996, where he played at single-A Asheville and high-A Salem.

Cunningham isn't recorded as playing in 1997, but he then returned for one final look at the pros in 1998, at independent Catskill, to end his career. 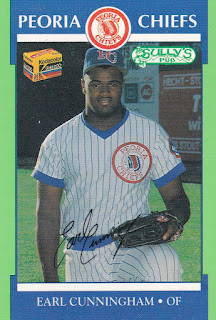