Don Brock took a line drive off his thigh in a college game; Played three seasons as a pro

Originally published Jan. 30, 2013
Don Brock remembered that April 1987 game well because it was his school's first win over an SEC opponent. But he also remembered it for something else, he told UpstateSpartans.com in 2010.

"I remember the game well for another reason," Brock told the site. "I took a line drive off my thigh in the second or third inning, which later began to bother me and was part of the reason I came out after five innings. (Chris) Hawkins came in and did a great job, and the offense supplied plenty of support."

Brock spent one more year at the school, then called USC Spartanburg, before turning pro. As a pro, Brock signed with the Giants. His professional career, though, was brief, just three seasons. He never made it above high-A.

Brock's pro career began with his selection in 1988 by the Giants in the 35th round of the draft out of USC Spartanburg.

At USC Spartanburg, Brock went 7-0 to start the 1987 season, picking up nine strikeouts in his seventh win. Brock was later inducted into the school's Hall of Fame, noted to still be in the record books in multiple categories in 2008.

With the Giants, Brock started at rookie Pocatello, getting 27 outings and posting a 4.50 ERA. For 1989, he moved to single-A San Jose, getting 31 outings there, three starts. He also posted a 2.62 ERA.

For 1990, Brock returned to San Jose. His season, though, was brief, just nine outings, one start. In 17.1 innings, he gave up 12 earned runs, ending his career.

Brock has gone on to stay involved in the game. He is currently listed as an assistant coach at West Oak High in Westminster, SC. 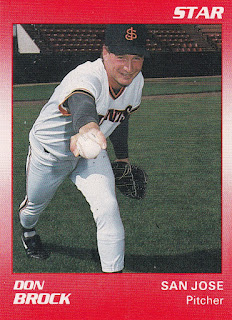