Dominick Johnson followed his father into the pros; He couldn't follow him to the majors

Originally published Feb. 14, 2013
Dominick Johnson arrived with a new organization in 1992, the same one his father Deron Johnson worked for, the Angels.

But, as the younger Johnson tried to impress his new organization, he also had to deal with his father's failing health. Johnson's father, Deron Jonson, played 16 years in the majors and later had a decade-plus coaching career, was dying of cancer.

"I know that my thoughts will be at home, that there's more important things than baseball and that my father is certainly one of them," Dominick told The Los Angeles Times that February, two months before his father passed. "I'd be lying if I said I won't be thinking of him, but I'm also paid to pitch and I'm looking forward to being back on the mound. The Angels have told me I'm going to pitch a lot, and that's all I can ask. I want the ball."

Johnson went on to pitch that year with the Angels' high-A team at Palm Springs. But, while he never could follow his father to the major leagues, he did eventually follow his father into coaching, the younger Johnson later becoming a coach in high school, for his hometown school.

Dom Johnson's career began in 1987, signed by the Giants as an undrafted free agent. He played his first year at rookie Pocatello, his next at single-A Clinton. Johnson's name was also spelled Dominic Johnson.

The 1990 season over, Johnson had surgery on his pitching shoulder. He came back for 1991, but spent the season back at high-A, on loan from the Giants to Reno.

"I was ready to go, and they thought differently, so they sent me here," Johnson told The Times that August.

Johnson ended up getting into 25 games that year, starting nine. For 1992, Johnson made his move to the Angels system, playing that year and the next at high-A Palm Springs. He stayed with the Angels through 1994, getting his first look at AA, with Midland.

Johnson's final year as a pro came in 1995, starting with the Red Sox at AA Trenton, then finishing out the year at independent Mobile, ending his career.

Johnson went on to serve as pitching coach at Poway High School in California. He also coached higher-level players. In 2007, he helped major leaguer Brett Tomko, who lived in Poway, work out flaws in his pitching motion, according to The Associated Press.

In 2008, Johnson was touched by cancer again, when his daughter Alexis Johnson was diagnosed with a rare form of cancer. The Poway community, though, stood behind the family, donating blood and performing other acts of support, according to Voice of San Diego.

By April 2012, Alexis could be counted as a cancer survivor, raising awareness of the disease with a local Relay for Life, according to The Pomerado News.

"It was so out of the blue when they said it was cancer," the father told Voice of San Diego in 2008. "I hope no other parent has to go through this, but the team and the Poway community have been so great with their love and support. I get teary-eyed when I think about it." 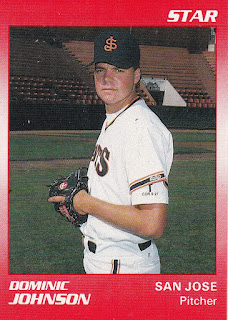