Damon Berryhill hoped to answer questions with the Braves; He did so in Game 1 of the 1992 World Series

After spending the first part of his career with the Cubs, Damon Berryhill looked forward to 1992 and his new chance to play with Atlanta, he told The South Florida Sun-Sentinel.

His new chance came after five seasons with time on the Cubs, and a down 1991 season.

"It feels good to get an opportunity to show the Braves I can still play," Berryhill told The Sun-Sentinel. "After last year, there are probably some questions in people's minds."

Berryhill went on to show the Braves exactly that, with one memorable swing of the bat that October. Berryhill did so by hitting a go-ahead three-run home run off of Jack Morris in Game 1 of the World Series, a home run that proved the difference in the 3-1 Braves win.

Berryhill ultimately played in 10 major league seasons and he has since gone on to a long post-playing career as a coach and manager in the minors.

Berryhill's career began in 1982, taken by the Cubs in the first round of the draft out of Orange Coast College in California.

Berryhill started with the Cubs at single-A Quad City. The catcher hit .276 over 62 games. He then made single-A Winston-Salem in 1985 and AA Pittsfield in 1986.

Going into the 1987 season, Berryhill showed what was possible by hitting .387 over the spring. He missed out on the big league roster, but the team took notice, according to The Chicago Tribune.

"He showed he had good power every once in a while. He hit well, and he looked like he could come on as a catcher," Cubs manager Gene Michael told The Tribune.

Berryhill then played just 17 games in Chicago in 1990. He played another 22 games at AAA Iowa and seven at single-A Peoria. His Peoria time earned him a card in the team's update set that year.

He saw another 62 games with the Cubs in 1991, before a late-season trade to the Braves. Then, in 1992, he hit .228 with 10 home runs over 101 games - and took over the regular duties late and in the playoffs after starter Greg Olson got injured.

Then, in Game 1 of the World Series, Berryhill hit the game-changing home run.

"I was just trying to look for a pitch I could hit for a base hit," Berryhill told reporters afterward. "He hung a forkball, and I popped it out of the park."

By 2002, Berryhill started his coaching career, as hitting coach at high-A Rancho Cucamonga. He then served as catching coordinator with the Diamondbacks and Rangers. In 2008, he served as manager at high-A Bakersfield.

Berryhill made AAA as manager with the Dodgers at Albuquerque in 2014. He returned to the Braves at AAA Gwinnett in 2017.

In 2015, as embarked on the season with AAA Oklahoma City, Berryhill told The Oklahoman why he continued in the game. 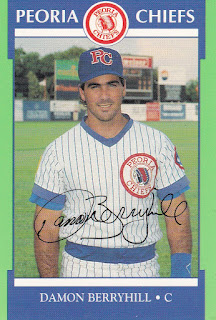