Chris Ebright hit a game-winner at AA in 1993, in one of his final games; He never made AAA

Three pitches in to his ninth-inning, pinch-hit at bat in this September 1993 game, Chris Ebright had a good idea what was coming next, he told The Orlando Sentinel afterward.

"With the bases loaded and a 2-1 count, you know the pitcher wants to throw a strike," Ebright told The Sentinel. "I just looked for something I could hit hard to get the run in."

He got that pitch and knocked a single to center for the game-winner, The Sentinel wrote.

Ebright picked up that game-winner at the end of his fifth season as a pro. That season also turned out to be his last. Ebright made AA over two of his seasons, but he never made it higher.

Ebright's career began in 1989, taken by the Cubs in the 18th round of the draft out of the University of Oklahoma.

Ebright started with the Cubs that year in 1989 at short-season Geneva. The outfielder hit .254 over 69 games.

In turning pro, Ebright had to shake an early label that he couldn't field. By May 1988, he and his coaches believed he'd left that behind, according to The Oklahoman.

"I wasn't as bad an outfielder as people made me out to be," Ebright told The Oklahoman. "But instead of being aggressive, I played scared. I was too hard on myself. I wanted to shake my label (of being a poor defensive player)."

He then moved to single-A Peoria for 1990. He hit .234 in 107 games there. In a July game, Ebright knocked two singles in the same inning to help Peoria past Rockford.

Ebright then returned to AA with the Cubs in 1993, at Orlando. The night after his September game-winner, Ebright hit a three-run home run in the team's finale, a no-decision due to rain. He didn't return for 1994. 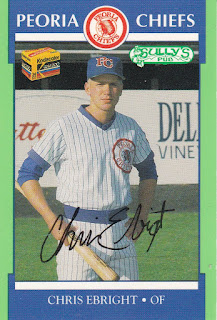