Bill St. Peter readied for the Mercury Championship in May 2008, and he also readied for it to be in front of his family and friends.

"I don't dream about it because I'm not a very good sleeper," St. Peter told The Bay City Times. "But it would be a great feeling to win the championship in front of your home crowd."

St. Peter's initial baseball career began in 1988, taken by the Cubs in the seventh round of the draft out of the University of Michigan.

St. Peter grew up in Bay City and earned accolades on the baseball field from his early years. Speaking on the occasion of St. Peter's induction into the area Hall of Fame in 2015, former teammate Jeff Braley spoke to MLive of the player St. Peter was.

"He took the game very seriously and went out and gave his best every game," Braley told MLive of St. Peter. "A lot of guys would strike out and say 'Oh, well.' If he struck out, it got to him. He would figure out what he needed to do the next time up."

His final time in pro baseball came in 1991 at high-A Winston-Salem and AA Charlotte. He hit .195 in 118 games between them to end his career.

By 2002, St. Peter started his time in pro walleye fishing. Triton Boats sponsored his boat and Mercury Outboard served as his motor sponsor.

In 2007, St. Peter traveled to Dryden, Ont., to fish Wabigoon Lake there in a Professional Walleye Trail event. St. Peter caught a 10 pound, 4 ounce fish, the biggest to that point that year, according to The Brainerd Dispatch. St. Peter also took his second tour win.

"Any place you go you can catch walleyes, thousands of them," St. Peter told The Dispatch of Wabigoon Lake. 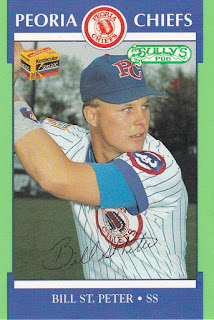