The back of the Jamestown Expos mascot's 1990 card calls him an "unspecified creature" in his second season in Jamestown.

The card goes on to apparently make clear the pronunciation of the Youppi-adjacent Expos minor league mascot's name. It was pronounced like "guppy" and not any other way.

The card also added a few other details: The seemingly odd choice of Boston as Yuppi's hometown and that he succeeded his cousin "Yippie" as Jamestown's mascot.

Yippie served as the team's mascot from 1983 to 1988, then Yuppi took over and stayed until the franchise moved to Vermont after the 1993 season.

Jamestown got a replacement team for 1994, a team that added a third and then a fourth mascot to Jamestown's sports history, J.J. Jammer and then Bubba Grape.

Yippie got his own card in 1986. That card held Yuppi's cousin as batting and throwing right-handed and put him at six feet tall and weighing 140 pounds. The front photo also recorded Yippie as blue.

Jamestown staffer Jim Brucculeri first created and performed Yippie in 1983 and Brucculeri recalled to The Jamestown Post-Journal how he won over the longtime Post-Journal beat writer with his antics in the suit.

After the Expos and Yuppi moved on, the Jammers and J.J. Jammer arrived. Author Hank Davis arrived in town for his book "Small Town Heroes" during J.J.'s first year and described him as an attempt to mix scary and cute: "J.J. Jammer is easily the scariest mascot I have seen," Davis wrote.

J.J. Jammer stayed through 2005, when he gave way to Bubba Grape. Bubba Grape then stayed until the team's end in 2014, when the franchise moved to West Virginia. 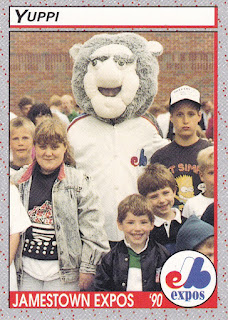