Former pro baseball player Todd Samples wanted to take people out not to a ballgame in 2011, but to Monterey Regional Waste Management District, according to The Monterey Herald.

He assembled a model of the waste management district, created entirely of recycled materials, and put it on display at that year's WestEnd Celebration in Sand City, The Herald wrote.

"I used to get angry about abuses to our environment," Samples told The Herald. "Now, I try to express it through my art and allow people to interpret it for themselves."

After eight seasons in the pro baseball, Samples had turned to two other interests of his, art and the environment. His pro baseball career included six seasons spent in the minors and then time in independent ball. He made AA, but he didn't make it higher.

Samples' pro baseball career began in 1990, taken by the Expos in the 10th round of the draft out of Liberty University. He went to Liberty out of Hillcrest High in Springfield, Mo.

At Liberty, Samples hit two triples and a home run in an April 1990 win.

He then started with the Expos at short-season Jamestown. He picked up two hits in a June win against Niagara Falls. He hit .246 in 59 games overall.

Samples moved to single-A Sumter for 1991. He hit .259 there, while hitting what would be a career high 12 home runs. He scored three times in an August game.

He played 1992 at single-A Rockford, where he doubled and walked in a May game. He hit .239 for the year and the Expos then traded him that off-season to the Brewers.

Samples played 1993 at high-A Stockton, knocking in two runs on a single in a July game. then 1994 largely at AA El Paso. He saw two final games at El Paso in 1995 and then moved to independent ball.

Samples played the rest of 1995 at independent Tyler. Then 1996 into 1997 at independent Salinas. He hit a home run in a May 1997 game, one of five games he played at Salinas that year. Those games marked the final games of his career. 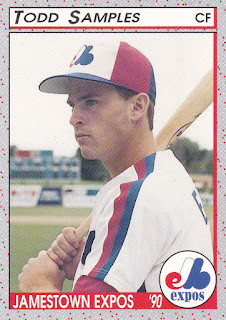