Longtime American Legion Post 491 head coach Dave Barnes recalled some of his old players to The New Jersey Herald in 2006, including Ted Ciesla.

Ciesla had played for Post 491 from 1984 to 1986 and Barnes recalled Ciesla as a prime example of what an American Legion ballplayer should be, according to The Herald.

"Ted showed the quality of his character early on," Barnes told The Herald. "Because of his exceptional ability, he had many offers to play elsewhere, but he remained loyal to Legion Baseball because he felt the program had been helpful to him."

Ciesla went on from Legion ball to play at Rutgers University and in the pros. His pro career lasted just two seasons.

Ciesla's pro career began in 1990, taken by the Expos in the 13th round of the draft out of Rutgers. He was also credited by his full name, Theodore Ciesla.

At Rutgers, Ciesla made first team all-conference in 1990.

He started with the Expos at short-season Jamestown. He also started strong. He went 4 for 4 in one early game and then had a three-run home run and a two-run single in another. He hit .239 overall in 62 games.

Ciesla then moved to single-A Rockford for 1991. He hit a two-run, two-out single in an April game. He got into 106 games there and hit .231. It marked his final season as a pro. 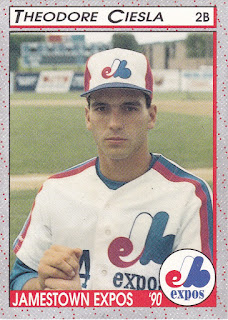