Steve Carter hit a home run in his sixth major league game; He was as surprised as anyone 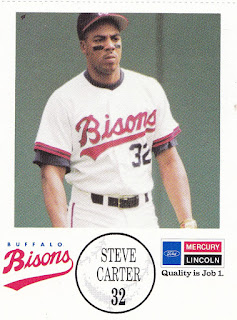 Steve Carter hadn't hit many home runs in his two seasons in professional ball. In fact, he'd only hit three. So when he hit one in his sixth career major league game in 1989 for the Pirates, he was as surprised as anybody.

"I don't know when I'll hit another one," Carter told The Pittsburgh Post-Gazette, "but it felt good today."

Carter would get into three more games for the Pirates that year and just five the next. That would be his only major league home run.

Carter was signed by Pittsburgh in 1987, taken in the 17th round of the University of Georgia. He spent that first year at short-season Watertown, hitting .310. He spent much of 1988 at single-A Salem, briefly hitting AA Harrisburg. He had three hits in one July game with Harrisburg. His average hit .296 on the year.

He got his break in April 1989, when Andy Van Slyke strained his rib cage, according to The Post-Gazette. He was considered one of Pittsburgh's top prospects. But in 18 at-bats, Carter couldn't bring the average he had in the minors to the majors. He got only that home run and one other hit.

Carter went back to Buffalo for the remainder of 1989. He hit .295 and one more home run. The Pittsburgh Press wrote that Carter could have done better at AAA, but he tried to change his game to being a power hitter.

Carter wouldn't return to Pittsburgh until September 1990. He played in five games, got five at bats and one hit. It was his final appearance in the majors.

Back in 1989, when it appeared he would be sent back down to the minors, Carter was satisfied.

"At least back home they know I'm definitely in the major leagues," Carter told The Post-Gazette. "My mother has been telling everybody 'My son's in the big leagues.' She's really happy. She's stuck by me and supported me and prayed for me."