Scott Little took the chances as they came; His major league chances amounted to three total games, one hit 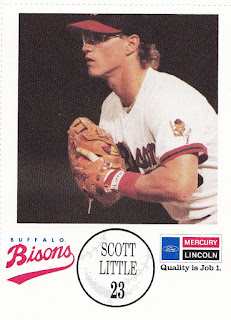 When Scott Little was brought to the majors in July 1989, the team told him to expect to pinch hit. He wouldn't get regular playing time.

To his hometown paper The Southeast Missourian, Little recounted how that information made the at bats he did get all the more important.

"All you can do is to take each chance as it comes to you," Little told The Missourian, "and work as hard as you can to make it come out right."

By that point, Little had gotten just two at bats, both of them outs. He would only get two more, two final chances that came as a game against the Cubs stretched into the 14th inning.

Little struck out in the 14th. Then, in his fourth major league chance, in the bottom of the 17th inning, Little took advantage, getting his only major league hit, a single to left.

Sent back down to AAA, Little never made it back.

Little's career began in 1984, taken by the Mets in the seventh round of the January draft, out of the University of Missouri.

The native of Scott City, Mo., Little went to Missouri in 1981 for football, not baseball. But he continued playing baseball, finally signing with the Mets.

Little made Buffalo full time in 1989, hitting .295 on the season, with three home runs and 43 RBIs. He also got that call up to Pittsburgh in late July, and those four at bats and one hit.

Little, though, returned to Buffalo for 1990, only getting into 36 games, hitting .226. In early May, though, his manager Terry Collins told The Missourian Little was doing well, despite an average that was then hovering at .208.

"The way I look at it, Scott made it to the big leagues last year and proved he can play," Collins told The Missourian. "In my own mind, I know he can play and that's something Scott's going to have to weigh in his favor."

Little's playing career, though, lasted just one more season. After that shortened year in 1990, Little returned to Buffalo for 62 final games, ending his playing career.

That last year, though, Little also served as the team's first base coach. By 1992, Little was a minor league manager, at single-A Augusta. Little is most recently credited with managing the Frisco Roughriders in 2008, winning Texas League Manager of the Year honors.

In his first season as a manager, Little told The Missourian he was satisfied with how his players were performing.

"There are times they don't always execute the way I'd like," Little told The Missourian, "but they're out there working as hard as they can all the time and that's all I ask."