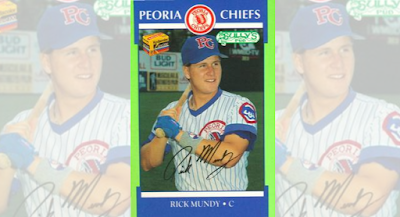 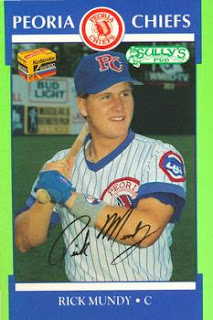 Rick Mundy gave an update to his hometown St. Louis Post-Dispatch on his new career in late-June 1988.

Mundy had taken his first professional hit for a home run, though success as a whole seemed initially hard to come by, The Post-Dispatch wrote.

"I'm not exactly tearing up the league, but I'm learning and I'm feeling more comfortable with every game," Mundy told The Post-Dispatch. "I haven't had many hits yet, but I'm hitting the ball hard. It's an adjustment time for me, but I'm confident that I can handle it."

Mundy's confidence took him to time in four professional seasons. He made single-A in three of them, but he didn't make it higher.

Mundy's career began that year in 1988, taken by the Cubs in the 36th round of the draft out of Pattonville High School in Missouri. Mundy was also credited as Richard Mundy.

Mundy started with the Cubs at short-season Geneva. He got into 41 games and hit .141. That one home run for his first hit proved his only home run on the year.