Mike Mathile's potential didn't pan out with trip to bigs, but he later used what he learned in business

Retired major leaguer Fred Scherman headed to Florida in spring 1993, hoping to help two young hurlers from his hometown of Brookville, Ohio in their quest to make the majors, according to The Dayton Daily News.

Scherman saw promise in both players, one of them Mike Mathile, he told The Daily News.

"They both have great potential," Scherman told The Daily News, "Mike as a starter and Rich as a reliever, and they had terrific seasons in the minors last year."

Mathile's previous season saw him go 12-5, with a 2.86 ERA at AA Harrisburg. He went on to see AAA in each of the next three seasons. Mathile, however, never saw the majors.

Mathile's career began in 1990, taken by the Expos in the third round of the draft out of Wright State University.

At Wright State, Mathile won 25 games over his career and struck out 203. He was later inducted into the school's Hall of Fame.

He then had that terrific season at Harrisburg in 1992. In April, he gave up a single hit and set down 14 consecutive batters in a 1-0 Harrisburg win.

He then finished out his career with 14 outings back at Indianapolis for 1995.

Mathile has since returned to Ohio and gone into business as a family business executive and private investor. He also became chairman of a business called CYMI Holdings.

In 2017, he spoke in a feature about how his time in baseball helped him in the business world.

"It wasn't until about two or three years into owning my own business," Mathile said in the profile, "where I started realizing that a lot of the skills that I had learned in dealing with people in a business setting came from me sharing a locker room with 25 other baseball players." 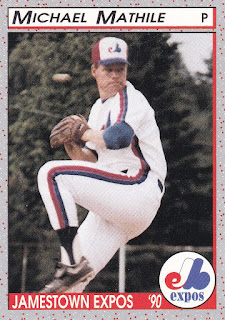