Marc Tsitouris swung the bat well in a July 1991 game; Played two seasons as a pro

Marc Tsitouris and his Sumter Flyer teammates hit hit the ball in this June 1991 game, according to The Sumter Item.

Tsitouris picked up three hits on his own and walked in another at bat. One of his hits knocked in a run, according to The Item.

"We swung the bats pretty well," Sumter manager Lorenzo Bundy told The Item afterward. "We got some base hits and we got some good defense."

Tsitouris picked up those three hits for Sumter in his second season as a pro. He also picked them up in his final season. Tsitouris played in two professional seasons.

Tsitouris' career began in 1990, taken by the Expos in the 24th round of the draft, out of Wingate University in North Carolina. Tsitouris was also credited as Mark Tsitouris.

At Wingate, Tsitouris started all four years and hit a then-school-record 53 home runs and won team MVP in 1989. He made the school's Hall of Fame in 2012.

With the Expos, Tsitouris started at short-season Jamestown. He got into 46 games and hit .246. 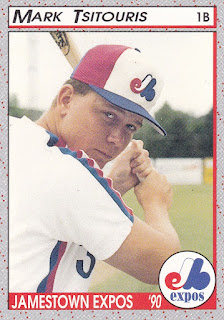