Joel Chimelis watched over Pete Alonso at AAA as a coach; Made bigs for two days as a player 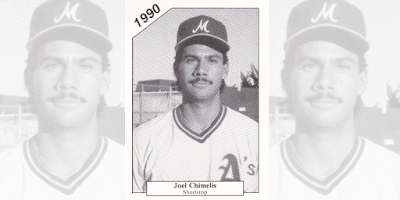 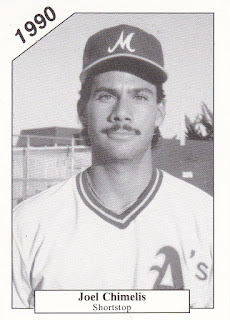 Top Mets prospect Pete Alonso hit one out at AAA Las Vegas in August 2018 and his coach there, Joel Chimelis, explained to MiLB.com the force behind his young hitter's swing.

"I honestly thought he missed that pitch," Chimelis told MiLB.com. "I mean, he didn't get all of it, but he just has some serious power. Every time he hits the ball, you think it has a chance. And he got that one up in the air and it just kept going and went out."

Chimelis watched over Alonso the year before Alonso went on to make the Mets in Flushing and set he season mark for home runs as a rookie.

Chimelis has worked to send players on to the majors for more than a decade as a minor league coach. He became a coach after his own lengthy career as a player, a career where he saw the majors himself, if only for a brief, controversy filled visit. He never got into a game.

Chimelis' long career in baseball began in 1988, taken by the Athletics in the 11th round of the draft out of the University of Texas at Austin.

He stayed all of two games. His new teammates wanted nothing to do with him. He didn't get into a game.

"I've got no comment," Chimelis told The San Francisco Chronicle after being sent back to AAA. "I don't want to stir up any problems with the team. It's a tough situation for everyone. It's a sensitive issue."

Chimelis never got to play in a game in the majors. He played out the year at Phoenix, then saw time at AAA the next year with the Mets. He then played in Korea, in Taiwan, in independent ball and in Mexico. He's last recorded as playing in 2002.