Joe Norris never made the majors himself, but saw a player he coached - Jordan Montgomery - get there

Joe Norris appeared on the cusp in March 2017 of seeing one of his players get to a place he never got to himself, the majors, according to The New York Post.

Norris, a veteran of nine professional seasons, served then as pitching coach at Sumter High in South Carolina. His former player, Jordan Montgomery, was about to become a Yankee.

"I pitched a long time in the minors, just not well enough," Norris told The Post. "To see Jordan move up has been fun to watch."

Norris spent his own time as a pro largely in the Expos, Twins and Marlins systems. He made AAA over parts of three seasons. He never made the bigs.

Norris' career began in 1989, taken by the Expos in the 26th round of the draft out of Bakersfield Junior College. Norris' name was misspelled on his Jamestown card as Joe Morris.

He saw nine more outings at AAA in 1997 with the Marlins at Charlotte, then four outings at AAA with the Reds in 1998. He also played in 1998 at AA El Paso with the Brewers and at independent Allentown to end his career.

His career over, Norris soon found himself returning to Sumter, where he played in 1991 and he became a teacher and a coach at Sumter High.

In 2013, Norris' club won the district championship with the help of the team ace Charlie Barnes, according to The Hilton Head Island Packet. 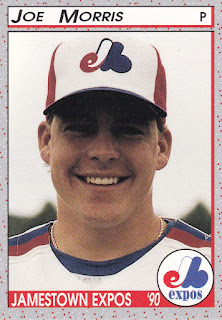