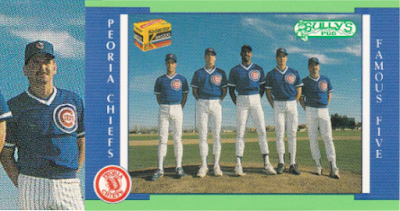 He threw a complete game shutout. In his major league debut.

Despite his solid start, Pico's time in the majors would be relatively brief. Three seasons later and his major league career had ended, and not on the best of terms.

Pico's career began as a 13th round draft pick in 1984, selected by the Cubs. He started that year at rookie league Pikeville, making AA Pittsfield and AAA Iowa in 1987. He returned to Iowa for 1988, getting his call-up to Chicago in late May.

In 1989, Pico was back in Chicago. This time, he was serving mainly as a reliever. In 53 appearances, he had an ERA of 3.77. He got a win in relief May 1, pitching three perfect innings. He did get five starts. In mid-May, he pitched seven shutout innings in a 4-0 Cubs win.

It was back to 31 appearances and eight starts for 1990. Pico's ERA also topped out at 4.79. He started the year with the big club. But it was briefly back to the minors in late April. His ERA then topped 10. Pico was pitching bad and he knew it.

Returning to the majors two weeks later, he got another start and another six scoreless innings.

"I don't blame them," Pico told The Chicago Tribune after his return. "My ball wasn't sinking, which is what I'm here for. . . . I blamed myself."

Pico was looking for a return to the Cubs for 1991. But his spring apparently wasn't good enough. It included one outing where he gave up three runs and four hits in two innings of work.

Two weeks later, he was cut. He was stunned, again. He told The Tribune afterward his hope was that he would sign with another National League team "because I want to pitch against this team right here.

"I did whatever (manager Don Zimmer) asked," Pico told The Tribune. "It wasn't good enough . . . I've been used and abused, but my arm withstood all of that."

Pico did sign with a new team, but it wasn't in the National League. It was with Oakland. Pico played the year at AAA Tacoma, never seeing Oakland. Parts of two more years with two other organizations and Pico's time in affiliated ball was done. He returned in 1995 and 1996 for looks at independent ball and he was done.

Pico has since served as pitching coach for several minor league teams, most recently the Mobile Bay Bears in 2009. For 2010, Pico served as the Diamondbacks' roving pitching coordinator.