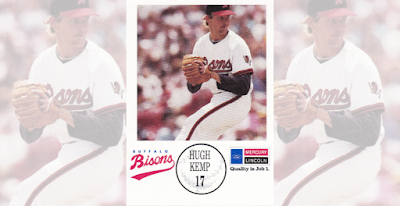 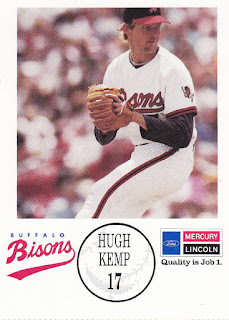 The big story of the day was the pitching of Georgia's Hugh Kemp, according to The Gainsville Sun. Kemp struck out 11 Florida Gators and gave up only three hits in this April 1983 contest, the first of two on the day.

"We had our chances in the first game, but the credit has to go to Kemp," Florida coach Jack Rhine told The Sun. "The kid's a competitor and a first-class guy."

Kemp became the story enough for the Reds to take notice. Cincinnati selected him that June in the 13th round of the draft. But, while his story would include eight seasons in professional baseball, his story ended without him reaching the majors.

Kemp started that first year for the Reds at short-season Billings and he pitched well. He went 9-3 with a 2.21 ERA. The next year, he made single-A Cedar Rapids, going 11-9 with a promising 2.79 pitching mark.

For 1985, Kemp divided time between three levels, single-A Tampa, AA Vermont and AAA Denver. His ERAs at AA and AAA increased, but they were still respectable.

His promotion to Vermont came amid a personal scoreless streak, according to the Schenectady Gazette. Kemp was sent to Vermont by mid-June, after 44-straight scoreless frames there. At Vermont, Kemp added another 13 scoreless frames, The Gazette wrote.

His 3.12 mark at Denver came in seven starts. Not helping his ERA was an August outing. Against Iowa, Kemp gave up four runs by the second inning. He worked five innings and gave up those four runs, according to an Associated Press account.

By November, the Reds promoted Kemp to their 40-man winter roster, The AP wrote. But it was back to AAA Denver for 1986, the entire year. It was AAA that Kemp would see for the remainder of his professional career, a total of five-straight seasons.

His ERA would also stay north of 4 for the remainder of his professional career. At Denver in 1986, Kemp was 10-7 in 28 starts with a 4.11 ERA. He took one of his losses in an August game. It was a 3-2 loss to Omaha, the O-Royals rallying in the seventh, according to The AP.

By December 1989, Kemp had signed with the Pirates. Another year at AAA, this time at Buffalo, and Kemp was done. He returned for spring training 1991, but the Pirates released him before camp was out.