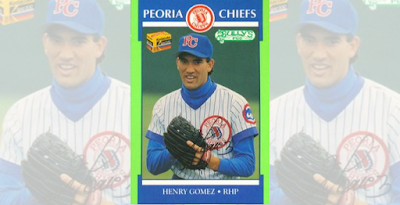 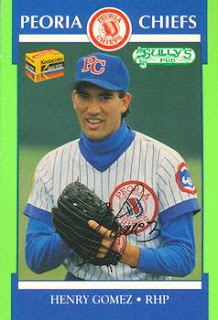 Henry Gomez had about as successful a start as he could have to begin his AAA career in August 1993 - he threw a complete game for a win, The Toledo Blade wrote.

His second start came with some mistakes, though, mistakes that helped lead to a 5-2 loss to Ottawa, The Blade wrote.

"He got those three pitches up and they jumped all over them," Toledo pitching coach Jeff Jones told The Blade. "Actually, the rest of the fastballs, - most of the pitches he threw - were down."

Gomez first made AAA and made that second start - in his eight professional season. That second AAA start, however, also turned out to be one of his final appearances as a pro. He never made the majors.

Gomez' professional career began in 1986, signed by the Cubs as a free agent out of his native Venezuela. Gomez was also credited by his formal name, Henrique Gomez.

Gomez started with the Cubs at rookie Wytheville. He went 2-5 over 16 outings, six starts. He threw a two-hitter in August, but still took a 1-0 loss.

With Charleston, he threw another two-hitter that July, this time a win. He also threw three three-hitters, according to his Peoria card back.

He had a bad outing for Peoria in July 1990, including giving up a two-run double. His 29 starts that year was tied for most starts in Peoria history.

He made AA Charlotte for 1991 and went 5-8 over a mix of starting and relief. He then played 1992 in Mexico, at Mexico City. For 1993, he signed with the Tigers and played at AA London and AAA Toledo.