Greg Mahlberg knew he'd get quality players at San Bernardino; He both played and coached 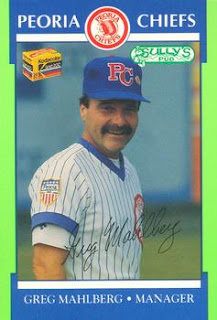 Tasked with helming of players from multiple organizations in 1993, San Bernardino Spirit manager Greg Mahlberg knew the players he would get would be good, he told The San Bernardino County Sun late that March.

"I assure you, we'll get some quality players, some quality names," Mahlberg told The Sun. "These aren't guys (organizations) are tossing off. It's people they want to keep, people they feel will play for them somewhere down the road."

By that point, Mahlberg had had the opportunity to work with all types of players as a minor league manager. Earlier, he also played with them.

Mahlberg turned to coaching after a playing career that lasted 10 seasons. He spent time in two of those seasons in the majors, for a total of eight big league appearances. He then went on to a minor league managerial career that lasted for more than 15 seasons.

Mahlberg's long career began in 1973, signed by the Rangers as an undrafted free agent out of the University of Wisconsin.

Mahlberg started with the Rangers in the rookie Gulf Coast League. He it .248 in 34 games. He moved to single-A Rocky Mount for 1974, then AA Pittsfield for 1975.

Mahlberg played in one game for the Rangers. He went 0 for 1. He then returned for seven more games in 1979. He went 2 for 17. Those eight games marked the extent of his major league career.

By 1982, he started his coaching career. He served as hitting coach that year at AA Lynn. He got his first managerial job in 1983, at single-A Bakersfield.

He arrived as manager at single-A Wausau for 1984 and returned there for 1985. In August 1985, he explained to The Cedar Rapids Gazette why he took out his pitcher.

"It was his first time out in two weeks," Mahlberg told The Gazette. "He was coming off an arm injury, and we had to limit the number of pitches he could throw.”

He managed at short-season Geneva for the next two seasons, then arrived at co-op San Bernardino for 1993. He worked to reassure his players about their status in their home organization, according to The Los Angeles Times.

"Some of these guys feel like their organizations have kicked them out," Mahlberg told The Times in August 1993. "What we tell them is, (the clubs) must have some interest. Otherwise, they would have been released."