Eric Jaques impressed in high school, played four seasons as a pro; Made AA, not the bigs 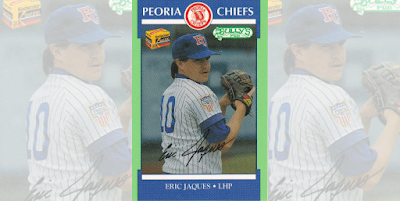 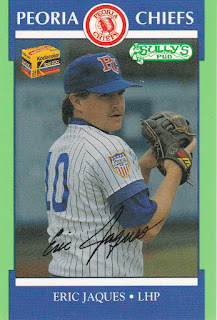 Sidney High School hurler Eric Jaques earned the win in this May 1985 contest. He also earned the respect of the opposing coach, according to The Dayton Daily News.

Jaques went on from Sidney High to play in college and in the pros. His pro career lasted four seasons. He made AA, but didn't make the bigs.

Jaques' pro career began in 1989, taken by the Cubs in the 29th round of the draft out of Indiana University. He went to Indiana out of Sidney High in Ohio.

He moved to single-A Peoria for 1990. He picked up his sixth save in a July contest and another in an August game. He went 6-6 overall at Peoria, with 12 saves and a 3.33 ERA. He also saw two appearances at high-A Winston-Salem.

Jaques played 1991 between Winston-Salem and AA Charlotte. He gave up a home run in a May Winston-Salem game. He saw 20 relief outings at Charlotte and went 3-1, with a 4.19 ERA.