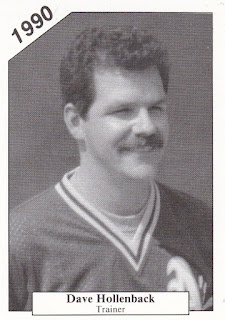 Dave Hollenback received extra duties in 1992 as trainer for the Modesto Athletics.

Hollenback's duties that summer included time as trainer in the league all-star game for the north team, according to his 1992 Cal League card.

Hollenback made the all-star team that year in his fifth season with Modesto and seventh as trainer in the Athletics organization. Records, however, do not show him returning for another campaign.

Hollenback's training duties began with the Athletics at short-season Medford in 1986 after graduating from Southern Oregon University with a degree in sports medicine.

Hollenback spent two seasons at Medford before arriving at Modesto for 1988. He then stayed in Modesto for those five seasons.

Hollenback was married, with one son, according to his 1992 Fleer card. The card also helpfully included his hobbies: Cross country skiing, hiking and anything outdoors.
Posted by Steve78 at 7:37 PM