Darrin Kotch got back on track at Sumter with three-inning save in 1991; He played four pro seasons

Darrin Kotch came on in the seventh inning for the Sumter Flyers in this June 1991 contest and he fished out the game, The Sumter Item wrote.

Kotch threw three innings, gave up no runs and a single hit to notch his second save of the year, The Item wrote.

"It was also good to see Darrin have a good outing," Sumter manager Lorenzo Bundy told The Item afterward in recapping the game. "He had struggled his last couple times out and he needed something like this to get him back on track."

Kotch went on to see 44 outings that year, his second as a pro, and save a total of three games. He played in two more campaigns. He never got on track enough to make AA.

Kotch's career began in 1990, taken by the Expos in the 27th round of the draft out of Rutgers University.

Kotch went to Rutgers out of Florence Township High in New Jersey. There, in June 1986, Kotch the hitter spoke to The Philadelphia Inquirer about the kind of count he liked: Two strikes.

"That way I know I've got to put the bat on the ball," Kotch told The Inquirer, "and that's all I try to do with two strikes. I usually try to hit to the opposite field, too."

Kotch started with the Expos as a pitcher, at short-season Jamestown. He got into 18 games, starting two. He went 5-1, with a 2.14 ERA.

Kotch's season at Rockford marked the end of his time with the Expos. He moved to independent ball in 1993, at Rochester. He got into 12 games there, starting one, with a 6.28 ERA to end his career. 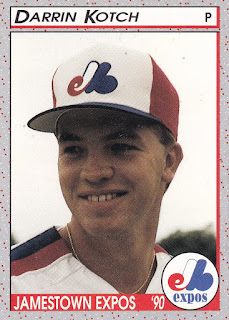