Danny Sheaffer worked to take advantage of his opportunities; Got big league ones over seven seasons 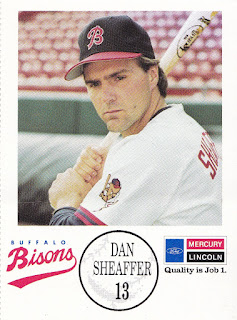 Danny Sheaffer wanted to make the most of the situation.

Red Sox catcher Rich Gedman was going to be out until at least May 1, in what was later revealed to be part baseball's collusion scandal. But, at the time, the Red Sox needed a catcher and Sheaffer was it.

"As long as I've got a locker in the clubhouse and a uniform to put on," Sheaffer told reporters after getting two hits in a game that April, "I'm not going to worry about Gedman. I'm just going to take advantage of my opportunities."

Sheaffer played in a total of 25 games for the Red Sox that year, the first of what would be major league time in seven big league seasons. His greatest successes, however, didn't come until 1993 - 12 years after he was initially drafted.

Sheaffer was initially drafted with high hopes by the Red Sox in 1981. He was taken in the first round out of Clemson University. It took him until 1984 to make AA New Britain for good, making the Eastern league All-Star team that year. He made AAA Pawtucket in 1985.

In his 25 major league games for 1987, Sheaffer couldn't find his bat, he hit just .121. But he did have some early success, driving in the go-ahead run and another run later in an April 18 contest. But it wasn't enough, he returned to AAA for 1988. He signed for 1989 with the Indians, getting a September call-up and seven looks at playing time. In 16 1989 at-bats, Sheaffer only got one hit.

Sheaffer signed with Pittsburgh for 1990, then played with the Minnesota system for 1991 and 1992, playing all three seasons at AAA. It wasn't until 1993, when he signed with the Rockies, that Sheaffer made the majors for good, spending each year through 1997 in the bigs.

Signing on with the Cardinals, Sheaffer had that last August game in mind, hoping to impress as a minor league catcher that spring. He was clear to The St. Petersburg Times that he had no intention of being affiliated in any way with replacement players or replacement ball.

His sights were on post-strike play.

"I know I may have played in my last major-league game on Aug. 11 if this (strike) goes through 1995, because I'm not getting any younger," Sheaffer told The Times. "But it's beyond my control."

Sheaffer did become a part of the Cardinals' future, playing 70-plus games each of the next three seasons for St. Louis. In August 1995, Sheaffer hit his first career grand slam, part of a five-run ninth inning to beat his old club the Rockies.

In August 1997, Sheaffer victimized Denny Neagle of the Braves, hitting an eighth-inning, two-run double to break a 1-1 tie. "Denny got a ball up in the strike zone, and it hurt him," Sheaffer told reporters afterward. "It was a blast."

But 1997 proved to be Sheaffer's final year in the majors. He played briefly with the Cardinals' AAA club in Memphis in 1998, ending his playing career.

Sheaffer soon became a minor league manager, taking the helm of short-season Eugene in 1999. He served four years as manager of Memphis, through 2006. More recently, Sheaffer has been a roving catching instructor with the Astros.

Sheaffer moved up the ranks as manager after two seasons at Eugene, where he dolled out advice to his young players that sometimes paid immediate dividends.

During one July 1999 game at Eugene, the Emeralds' first 10 batters of the fifth reached base, nine of them scoring, according to The Eugene Register-Guard. It came after Sheaffer got on his players, telling them to take a different approach, player Ryan Gripp recounted to The Register-Guard afterward.

"He told us to hit the ball hard and go the other way," Gripp told the paper. "Nobody wants to make the first or last out in that situation."