Armando Moreno got called up to the bigs for one game in 1990; He didn't get into it and didn't get back 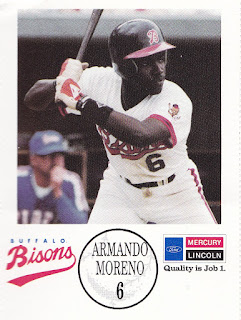 Armando Moreno got called up to the Pirates in 1990. It was understood at the outset, though, that the call would be brief, The Pittsburgh Post-Gazette wrote.

The reasoning, Pirates GM Larry Doughty told The Post-Gazette, was that the team needed a right-hander on the bench to face lefties from the Phillies.

"He's never been in the major leagues," Doughty told The Post-Gazette, "But he's a veteran."

As it ended up, Moreno never did play in the major leagues. Called up for that one game that August, Moreno remained on the bench for that game. The Pirates then returned him to the minors. He never got back.

The veteran Moreno was in his ninth professional season that year with the Pirates. His career started in 1982, signed by the Expos out of his native Puerto Rico.

He played that first season at rookie Calgary, hitting .338, with five home runs. He moved to single-A Gastonia in 1983, continuing that hitting at .327.

Moreno's first look at AA, though, saw a drop in his batting average. He hit just .230 at Jacksonville in 1984. He also stayed at Jacksonville through 1988 - five full seasons.

Morano made the Southern League All-Star team in 1988, hitting .305 by early July and leading the league. After that season, Morano finally made it to AAA, at Indianapolis. He hit .275 with Indianapolis in 1989, then signed with the Pirates for 1990.

With the Pirates, Morano played the year at AAA Buffalo, except for that one call up to Pittsburgh. At Buffalo, Morano hit .273, with 10 home runs. One of those home runs tied a game in early June.

Morano, though, played just one more season, in 1991, back at Buffalo, ending his career without playing a game in the majors.