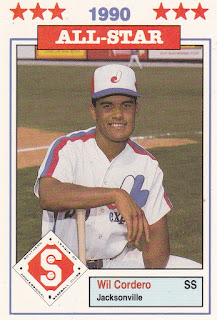 But the Expos saw big things for their young Puerto Rican prospect, according to The Houston Chronicle.

"He has so much athletic ability about him," team assistant director of scouting Frank Wren told The Chronicle that September. "He's got great physical tools, good hands, a good arm, he's big and strong and he handles the ball away very well."

Cordero ended up making Montreal less than four years later, at the age of 20. He didn't stop playing in the majors until 2005, seeing time in 14 big league seasons and making an All-Star team.

Cordero was signed by the Expos in 1988 as an amateur free agent out of his native Puerto Rico, playing his first year at short-season Jamestown.

Cordero got a look at AA Jacksonville in 1989, then made AAA Indianapolis in 1991. It was then in July 1992 that Cordero made his debut in Montreal.

Cordero made Montreal in a season where he saw a series of injuries, and contracted Chicken Pox, according to The Montreal Gazette. But Cordero came back to get into 45 games with the Expos, and hit .302.

In 1993, Cordero played the entire season with the Expos, hitting .248, with 10 home runs. In the strike-shortened 1994 season, Cordero hit .294, with 15 home runs. In early July, Cordero was named to the All-Star team and hit is first major league grand slam to help the Expos into first place, all in the same day, according to The New York Times.

Cordero stayed with the Expos through 1995, when he was traded for 1996 to the Red Sox. His time with the Red Sox, though, turned out to be rocky.

His first season with the team was limited to just 59 games. Then, in June 1997, came domestic abuse allegations. He missed 11 games, finally returning after going to counseling, The Associated Press wrote. On the season, he hit .281, with 18 home runs in 140 games.

By spring 1998, the Red Sox released him. He then signed with the White Sox, looking for a chance to get his reputation back from his off-field problems.

"I recognize that I've made mistakes and have worked hard to change," Cordero said in a statement after signing with Chicago, according to news services. "With the support of Chicago's fans and the White Sox, I see this as a tremendous chance to redeem myself and my reputation."

In one May 2001 game, Cordero tied a game with a ninth-inning, two-run home run.

"The best thing about the hit was that we won the ballgame, and that feels great," Cordero told reporters afterward. "I am just trying to contribute as much as I can and it feels good when you make a play that helps you win."

Cordero went on to play into 2005, returning to the team that originally signed him, the Expos, in 2002. He played his last games in 2005, with the relocated Expos, the Nationals.

By 2007, Cordero was working as an instructor. That July, he stopped in to teach young players in Monticello, NY. Asked by The Times Herald Record of Middletown about the greatest moment of his career, Cordero looked back to the beginning, his major league debut back in 1992.

"It is like a dream," he told Times Herald Record. "After all this hard work - I made it. Once you're there, all the real work begins because you don't want to go down to the minors."