Russ Cormier helped his team to a winning streak; He never could do so in bigs - 10 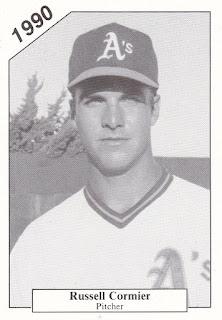 The Modesto Athletics rattled off 16-straight wins in July 1991 and hurler Russ Cormier helped them get there, according to The San Bernardino County Sun.

The starter Cormer claimed four of those wins, as he put up a combined ERA of 0.96, The Sun wrote.

Cormier picked up those four wins in his third season as a pro. He played just one more season. He made AA, but he didn't make the bigs.

Cormier's career began in 1989, taken by the Athletics in the 12th round of the draft out of Northeastern University.

He threw a two-hitter in a 1987 summer league game.

With the Athletics, Cormier started at short-season Southern Oregon. He went 3-2, with a 4.00 ERA.

He moved to single-A Madison for 1990, where he went 3-0, with a 2.06 ERA over eight starts. He threw two consecutive one-hitters in May starts. He struck out seven in the second one. He picked up another win in a June contest. Though he had a card for Modesto, was not recorded as playing for them in 1990.

Cormier played 1991 between high-A Modesto and AA Huntsville for the Athletics and, after a trade, with the Expos at high-A West Palm Beach. He went 10-8 on the year.