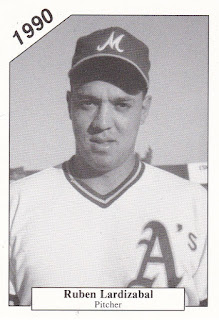 Rio Rancho's American Legion squad had their eyes set on a championship at the start of the 1998 season and the club hoped to do it through hard work, head coach Ruben Lardizabal told The Albuquerque Journal that June.

"The players want to get as much experience as possible," Lardizabal told The Journal. "We also have things we want to get done."

Lardizabal's own experience included time as a player himself, one who went on to the pros. He played three seasons, topping out at high-A.

Lardizabal's career began in 1989, taken by the Athletics in the 51st round of the draft out of Arizona's Cochise College.

The Athletics selected him after he won honorable mention All-Conference in 1989.

Lardizabal started with the Athletics between the rookie Arizona League and single-A Modesto. The pitcher got into 13 games between them, starting eight. He went 3-3, with a 5.09 ERA.

Lardizabal then returned to Modesto again for 1991, but couldn't improve on his earlier stats. He went 4-10, with a 6.45 ERA to end his career.

Lardizabal soon found his way back to New Mexico, where he coached at Rio Rancho and then at Rio Rancho's Cleveland High.